Recently i had the opportunity to look at reforming of electrolytic capacitors that had been stored unused in a power supply.

The capacitors in question are Cornell Dubilier Computamite branded FAH 42500-30-D3 which are 42,500uF 30V smoothing capacitors from a power supply that was dated March 1973, 42 years old at the time of this blog entry! 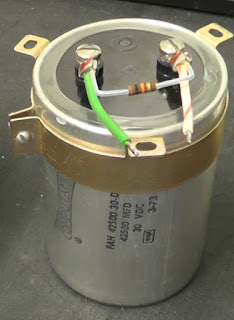 The capacitors were stored in-circuit with a bleed resistor of 10 kOhm, storage time was unknown but looking at the rest of the equipment i doubt they would have been used for at least 15 years, probably much longer.

Electrolytic capacitors work by storing a charge on two thin aluminium foil sheets separated by a dielectric material, usually paper impregnated with an electrolyte which is then rolled up into a cylinder and mounted inside an aluminium can with terminals for connection. 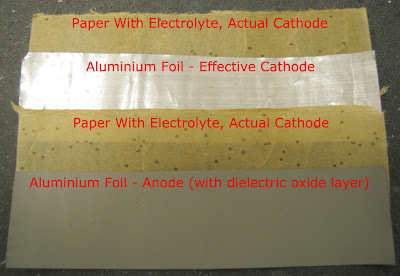 If capacitors are left for long periods of time, either in your storage bins, warehouses or even in manufactured products the electrolyte slowly erodes the oxide layer reducing it's insulating properties. If this is allowed to happen only for a couple of years then no issues will arise as the oxide layer will recover when the capacitor is next used. However over longer periods, especially on higher capacity and higher voltage rated capacitors they should be reformed in a controlled manner. Failure to do so may result in localised hot spots between the anode and cathode where vaporisation of the electrolyte can occur which leads to further damage of the aluminium foil.

With this in mind and reading about reforming capacitors in articles it seemed logical to limit the current flow into these capacitors and allow them to slowly build charge to the final voltage and allow the oxide layer to reform in a controlled manner.

Using my Keysight 6632B System Power Supply i initially charged the capacitor to 5V with a current limit of 50 mA. The advantage with these 42,500uF capacitors is their size, it means i can better see the processes involved as the time constant for charging means we have more time to see the process in action.

Initially i noticed that the capacitor certainly drew all the 50mA current available making the power supply operate in constant current mode, the voltage began to climb very slowly to 5V. This indicates the energy from my power supply was flowing into the capacitor but was not being stored as you would expect. I propose this energy was being used to re-establish the oxide layer.

Once the voltage reached 5V the current flow slowly reduced but did not fall to close to zero as i would expect. This indicates that either the capacitor is 'leaky' or as i suspect the energy was being used to reform the oxide layer. The still intact 10 kOhm bleed resistor would account for only 500 uA at 5V.

I disconnected it from the power supply and left it to discharge through the bleed resistor to about 500 mV and charged it again. This time the voltage rose much quicker than previously seen and after it was left connected for several minutes the final current draw was lower too and continuing to drop.

I repeated the procedure again; discharging and charging it but this time i set my power supply to 10V. During charging i noticed that the charge rose normally to 5v but then while charging to from 5V to 10V the voltage rose very very slowly again. I am speculating here that the oxide layer formed initially was enough to block a 5v charge but was not enough to block 10V and so over time the oxide layer increased to slowly block the 10v charge.

I repeated this process in increasing 5V steps, allowing it to take current at the set voltage for about 5 mins at a time until i was able to charge the capacitor to 30.5v and left it connected 'on charge' for several hours.

After finding a somewhat incomplete datasheet for this particular capacitor i went to test the ESR. This i measured using the same method as Alan Wolke (aka W2AEW) detailed in his video #135. After measuring the capacitor for after the treatment i found it's uF and it's ESR was right within specification.

Although these capacitors in question appear to have reformed very well i do not think i would really like to use these long-term given they are over 40 years old but it certainly proves the theory and practice for reforming very old capacitors.

It is vital to limit the current flow into the capacitor during the reforming process. If my understanding is correct this is more critical right at the beginning of the process. So i would recommend limiting the current to no more than 50mA (much less for smaller capacitors) and the voltage to 25% of it's rated voltage and allow it to charge and hold it at that voltage for 10 mins. Then repeat this process in 25% voltage steps until you reach it's operating voltage and then hold it there for 30 minutes.

During the holding time the current flow should drop to almost nothing. After the procedure measure the ESR, leakage and overall capacitance and compare to it's rated specification, if in doubt, discard the capacitor and use a new one.

I recently purchased a DER EE DE-5000 LCR meter, these are well regarded and inexpensive meters made in Taiwan. The unit i purchased wa...